It didn’t just mean another football match, it meant the chance to secure the team’s place into the ESFL Wisden’s Sports Challenge Cup final. 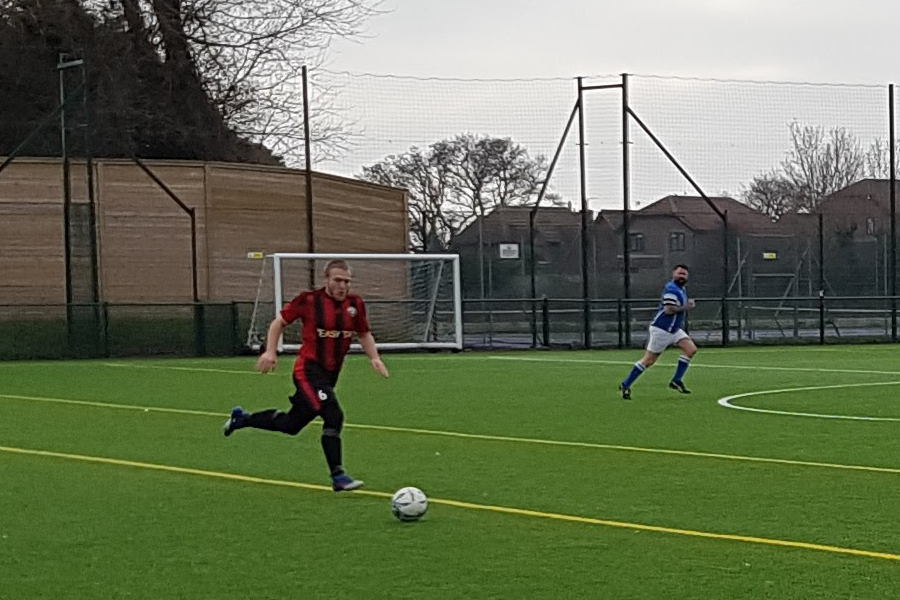 But first they had to take on higher league opposition Rock-a-Nore at South Coast’s Bexhill College ground. Both teams shared similar stats in their respective leagues, so it was clear no quarter would be given as both teams were oozing confidence. 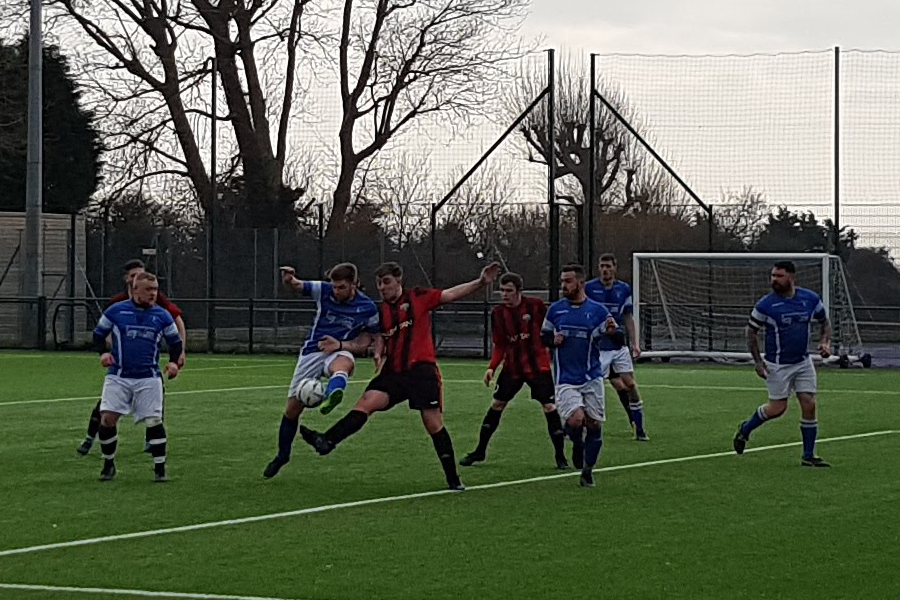 After an uncharacteristic dip in form against Victoria Baptists last Saturday – a team that is also finalist contenders in the competition – every Chopback needed to be on form.

The game kicked off under a bright sunshine and both teams began to feel one another out. In the opening three minutes Jack Bloomfield found himself in front of the visitor’s goal. Defence beaten, goalkeeper on the floor, ball needing just a flick… No one really knows what happened next, but one thing’s for sure, the sun wasn’t in Jack’s eyes but the ball was picked from his pocket.

There was early drama three minutes later, when Coast’s goalkeeper Ben Tate saved a strong shot but couldn’t hold it, the ball rolled away from him at pace, straight to an on rushing Rock-a-Nore forward, In a moment of confusion Tate tried to win the ball with his feet,  missed and made contact with his opponent. 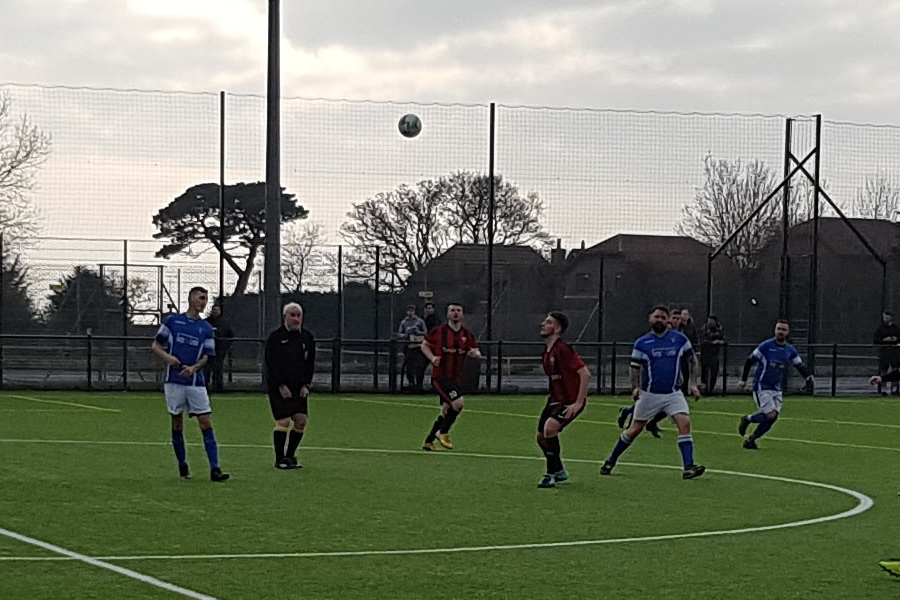 The referee blew his whistle and immediately pointed to the spot. The visitors penalty taker hit hard and low to Tate’s left post, he dived and made contact, but the shot was true and ended up in the back of the net. It was an early set back for the young Chopbacks. 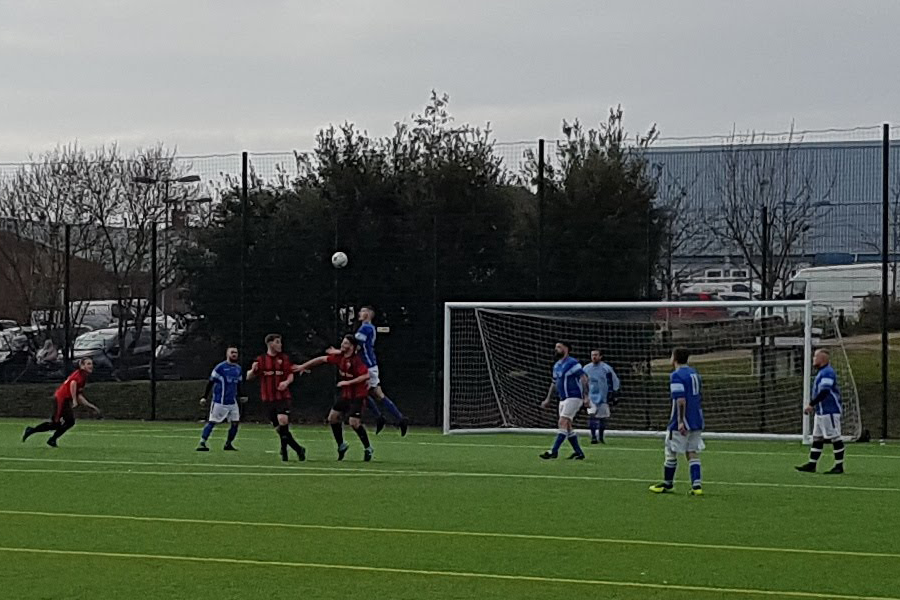 It was some 50 seconds later the ball broke loose in Rock-a-Nore’s box after a Callum Homewood free-kick, Bloomfield pounced on the opportunity, making absolutely sure this time slotting home well to even the score in the seventh minute. 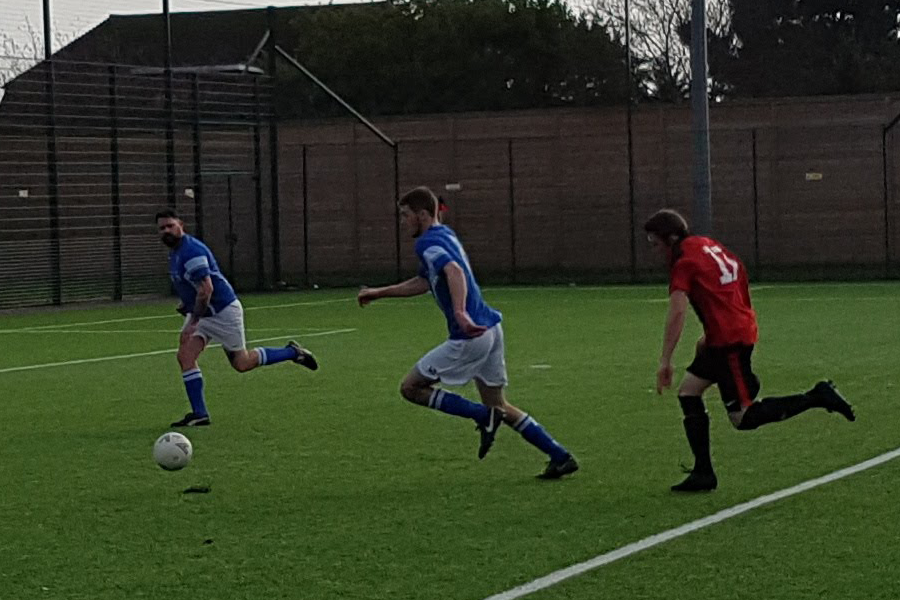 The game was very physical as expected but football ability always shines through, in an attacking move approaching the visitors box, Connor Easton laid off Brad Owens who executed yet another trade mark 20 yard screamer, leaving the keeper with nothing else to do than pick the ball up out of his net and we were only 14 minutes in. 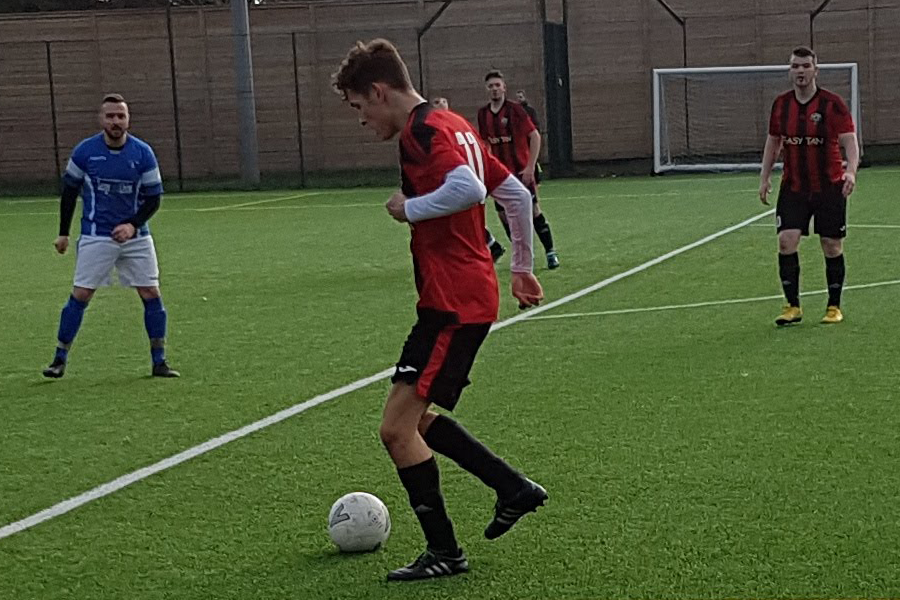 South Coast rolled on in their relentless attacking style. Four minutes later Bloomfield expertly turned his man in the away team’s box and played a lovely ball across to Easton who slammed the ball home with precision, increasing his team’s lead to 3 – 1.

Rock-a-Nore had a couple of chances, but the Tate made up for his earlier mistake with a fine save or two and was commanding in his area. 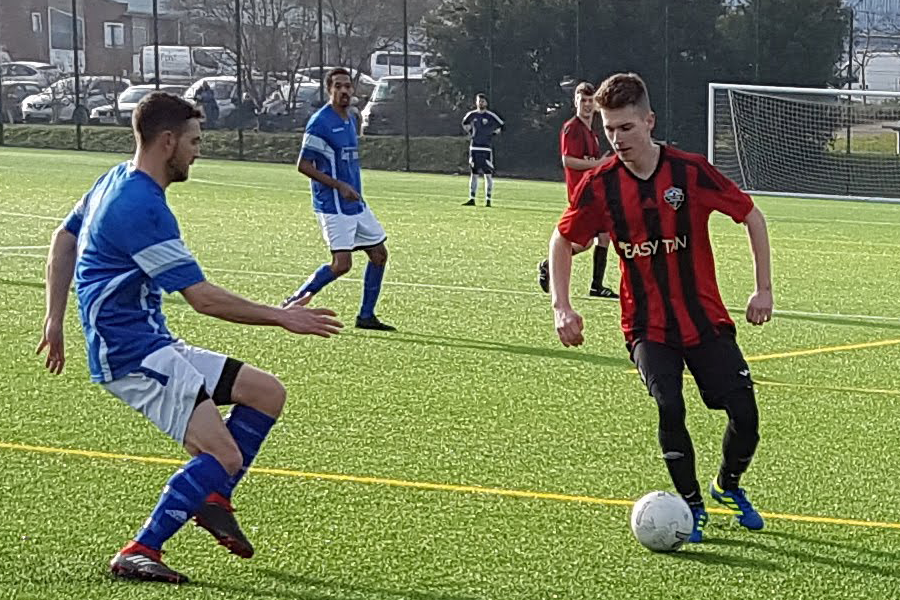 At half time, the message from management team Sutcliffe and Sam Cook was to expect a considerable increase in fouls as their opponents knew they couldn’t match the Chopbacks through football ability alone.

Rock-a-Nore made changes, notably their goalkeeper who was injured in a 50-50 late into the first half.

The substitute keeper must have been their man of the match, as he managed to prevent South Coast scoring for nearly the entire second half making several admirable saves.

The bulk of the second half was stop and start as  tackles and challenges were aplenty. 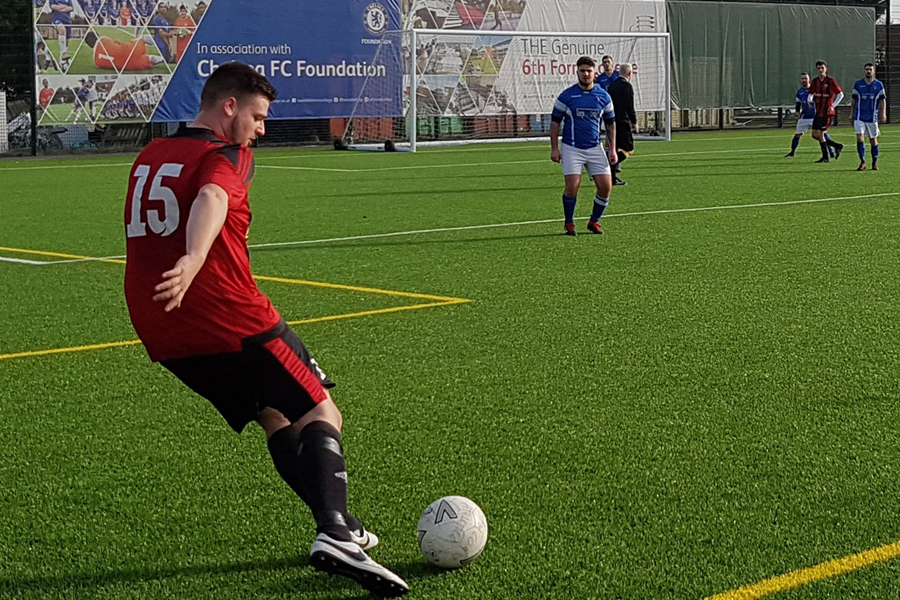 South Coast’s defensive strategy – when called upon – in the shape of Byron Nichols and Lee Finnigan, proved inspiring as the visitor’s main striker was left frustrated after the ball was continuously taken away from him predominantly by the dynamic duo.

Chopbacks captain Dayle McGurk kept his young teammates secure at the back and well motivated, however the game stagnated. 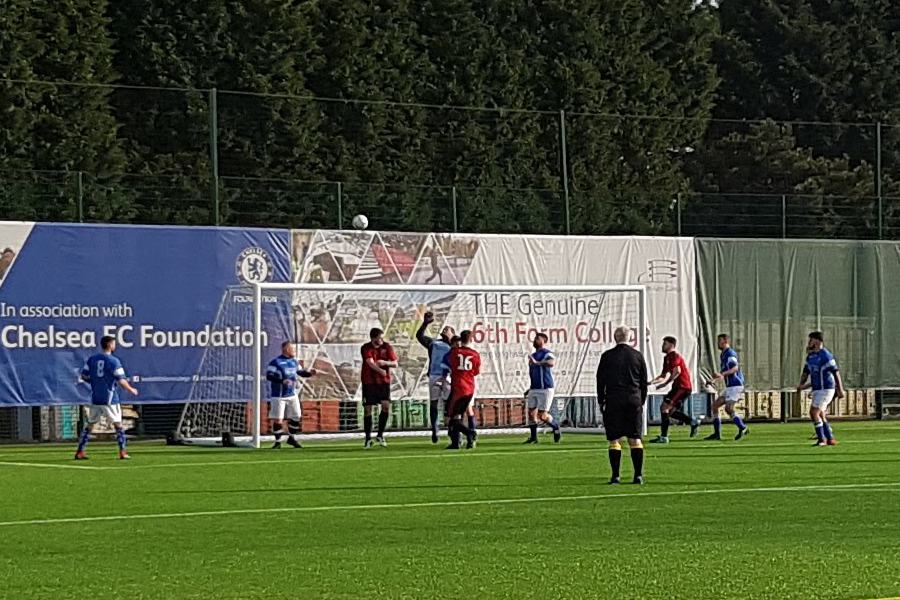 With one minute left to play, something very special happened.

Connor Easton picked up the ball around 20 yards out from the opposition goal, with determined purpose he demonstrated his absolute class by weaving in and around several Rock-a-Nore players, the ball seamed to be glued to his feet as he neatly exchanged it from one foot to the other, in the process gaining ground as well as reading and stepping over a barrage of flying in hard tackle attempts. 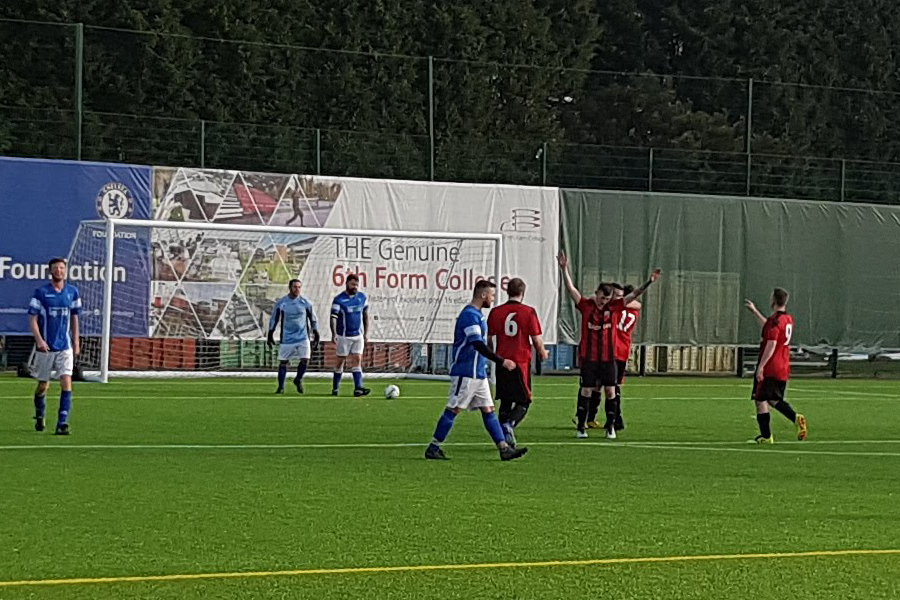 Easton selflessly looked up, slotted the pass across and Fuller tapped in the goal that made absolute sure South Coast Athletico would be cup finalists.

As the final whistle went, after the handshakes, the players and management team alike were shattered but thrilled with one of the best team performances of the club’s short history.

After the game, Manager Sutcliffe heaped praise for his men saying: “We knew Rock-a-Nore would give us problems, they are a very good side but we did our homework and put in place a strategy to stifle their attacking element. The lads all played so well, putting everything into the game they could, heart, soul, flesh and blood!

“They are a credit to each other and the club.  I couldn’t be anymore proud of them and what we as a club are achieving.” 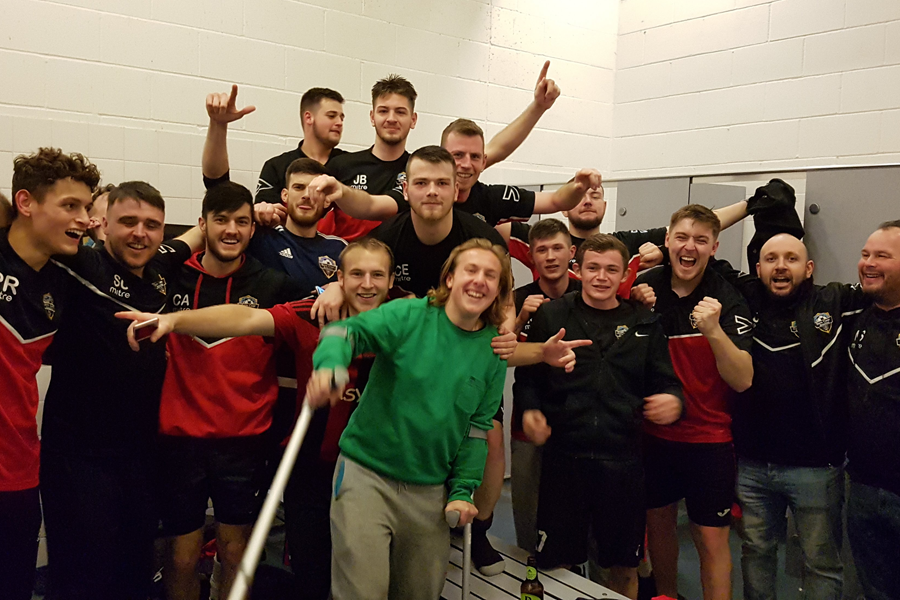 Man of the match was awarded to Lee Finnigan for the second week in a row after his exceptional demonstration of work rate and his execution of the teams defensive strategy to the letter.

Next weekend the lads return to the league competition away to Bexhill A.A.C.