While the Christmas break provided a chance for the Chopbacks to recharge their batteries the players also missed playing football and Saturday afternoon couldn’t come quickly enough. 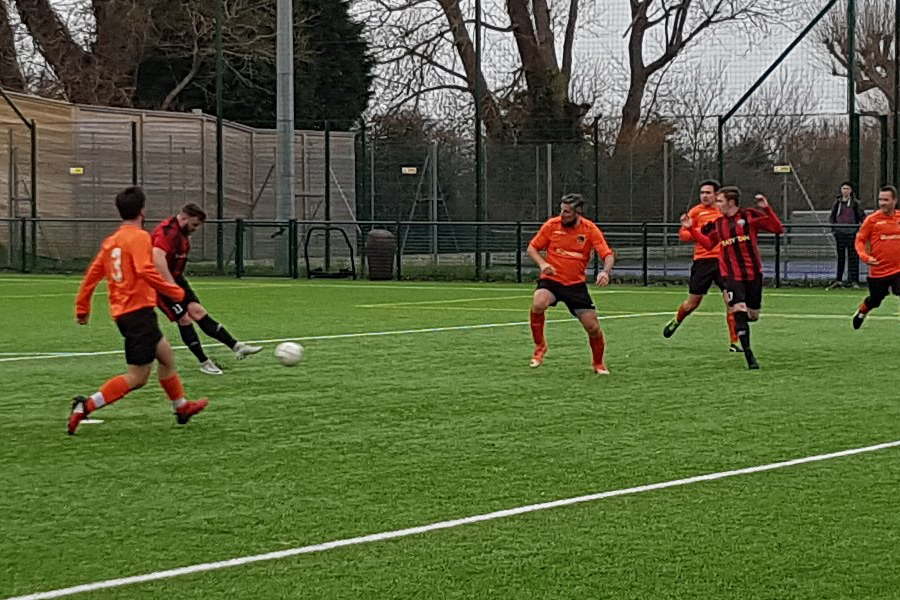 From the first whistle, Coast took the game by the scruff of the neck, confidently forging attacking runs and chances while looking rock solid at the back.

The Centre back pairing of Dayle Mcgurk and Georgie McDonagh, complimented by Connor Smith and Charley Adams either side with Ben ‘The Cat’ Tate commanding his area once again shone through.

It took ten minutes for the ball to find the back of the Orington net thanks to a Luke Darvill pass to Mike Hawley, just in the box, who thundered home a trademark shot. 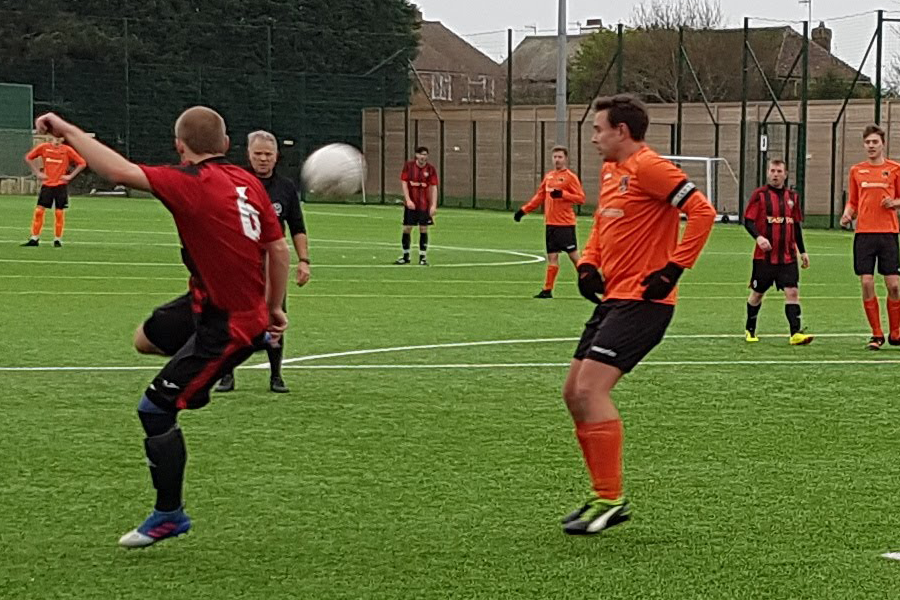 Mike then hit the post for an on rushing Jack Bloomfield to bury the ball past the Orington keeper 18 minutes in.

Orington picked themselves up and set out to get something back, but despite their persistence, Coasts’ very own ‘Cat’ was not really troubled. 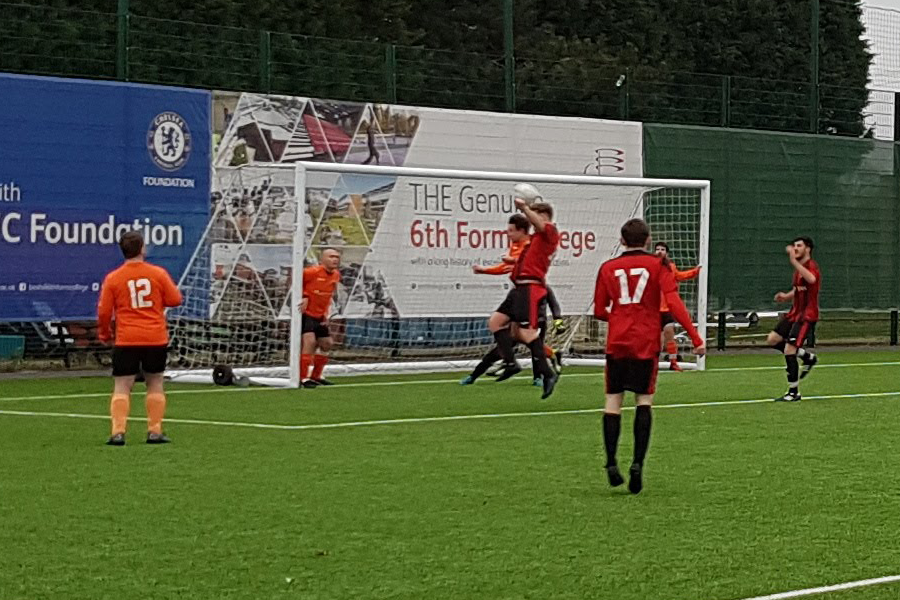 The score could have been doubled in the following 20 minutes but for some excellent goalkeeping from the opposition goalie. Then two minutes before the break, after a lovely strong piece of build up play, the ball found Brad Owens at the edge of the box but facing a wall of Orington players denying him a chance to shoot. 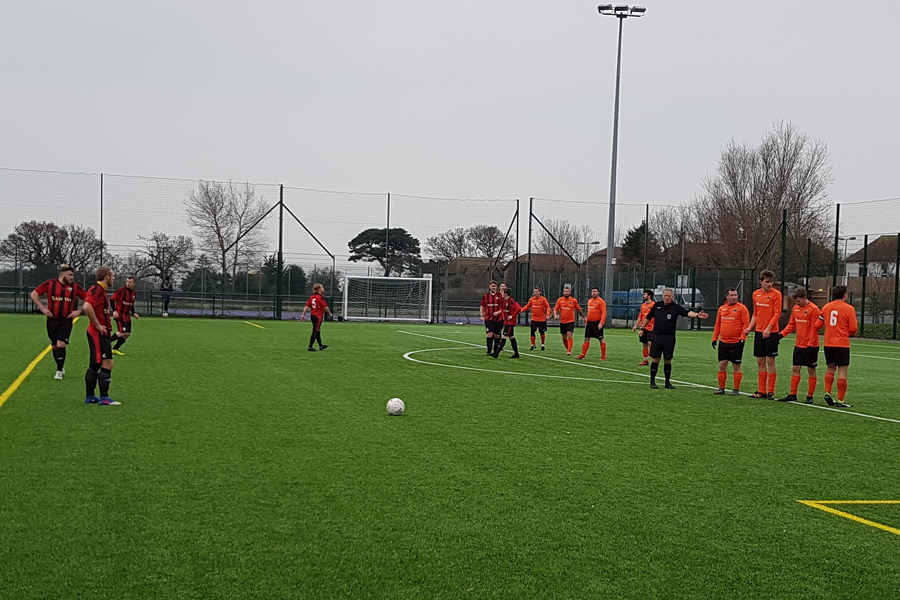 In a moment of absolute quality, Brad’s superb awareness enabled him to loft the ball up over every Orington player picking up an unmarked Darvill who latched on to the ball heading it home into the back left of the Orington net.

Half time finished 3-0 but could have been four after a goal was ruled out as the referee decided not to allow advantage, instead giving Coast a free kick. 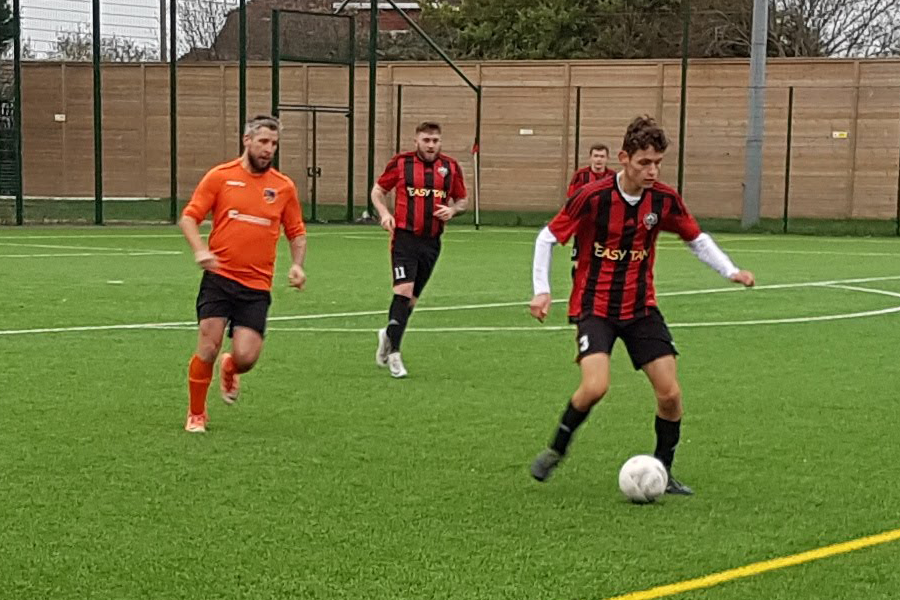 Second half continued in the same vein,  seven minutes in and once again midfield maestro Owens added to his ever increasing list of assists feeding from a corner for an attacking Charlie Adams who tapped the ball home taking the score to 4-0.

Orington gave one more push lasting half an hour or so,  but then began to tire. 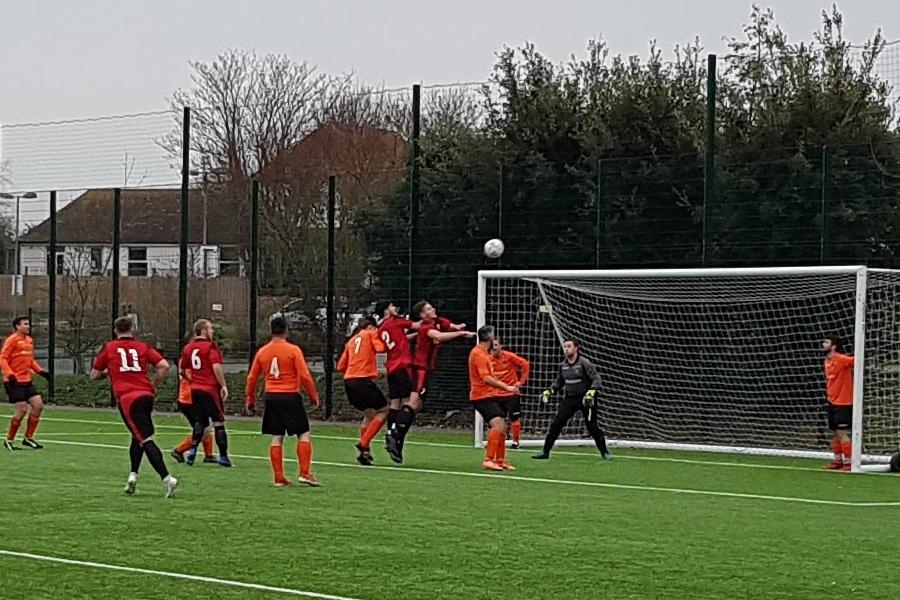 South Coast carried on relentlessly, the reward being another well worked goal in the 84th minute, with the through ball assist coming from Adams, into the path of Bloomfield who slammed the ball past Orington’s keeper.

Four minutes later Harry Jackson claimed to have provided a headed assist for Darvill to net his second of the game with a cool finish. 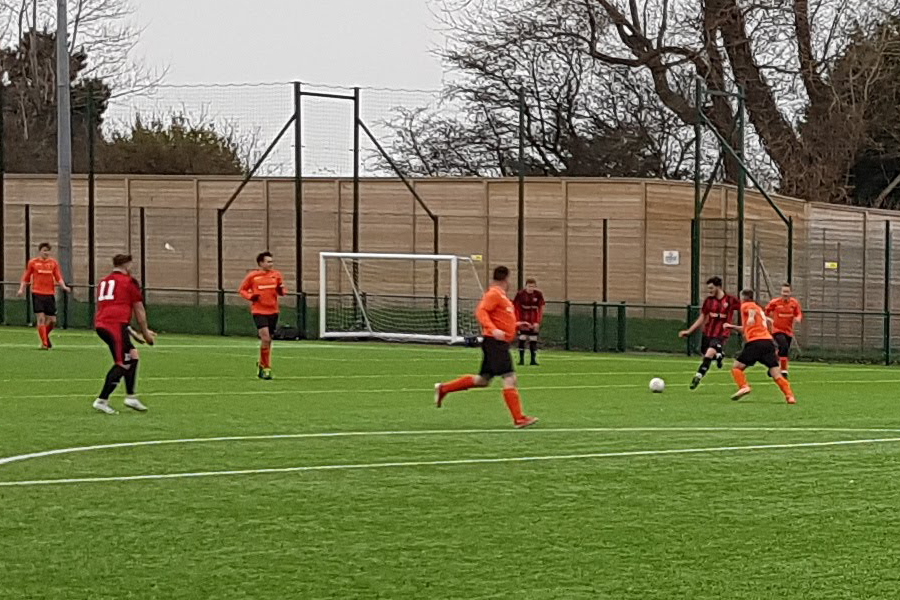 But there was a familiar name yet to make it onto the score sheet for the Chopbacks. He’d come agonisingly close several times during the second half, however, few things in life can be relied on like South Coast Athletico’s Connor Easton. 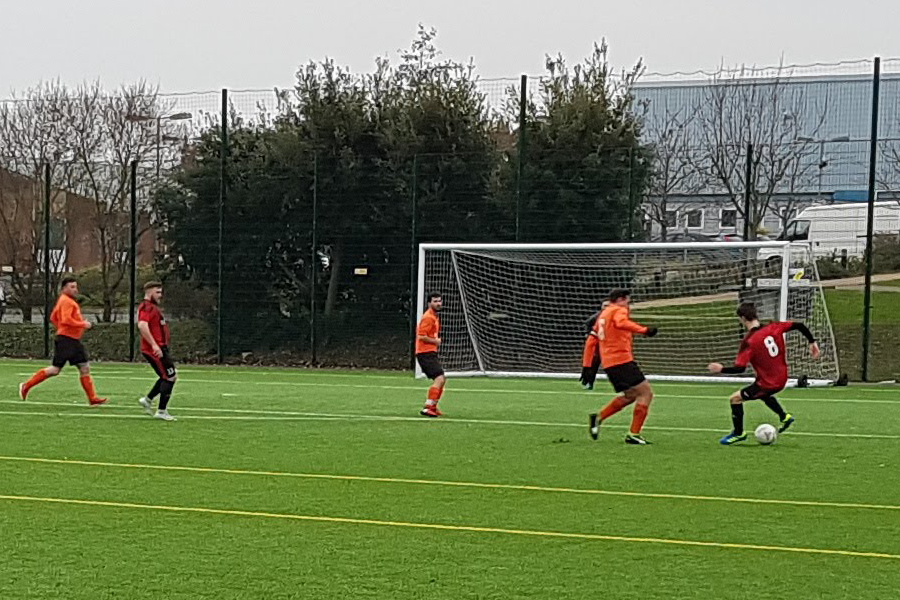 In the final play of the game Darvill played through to Easton  who dispatched yet another cool clinical finish to secure his name on the score sheet.

Moments later Easton looked set to repay the favour when he found himself one on one with the keeper but chose to put the ball across to an on-rushing Darvill who thought he had his hat-trick but somehow shot wide.

The referee blew the whistle moments later and the tie ended 7-0 to the Chopbacks. 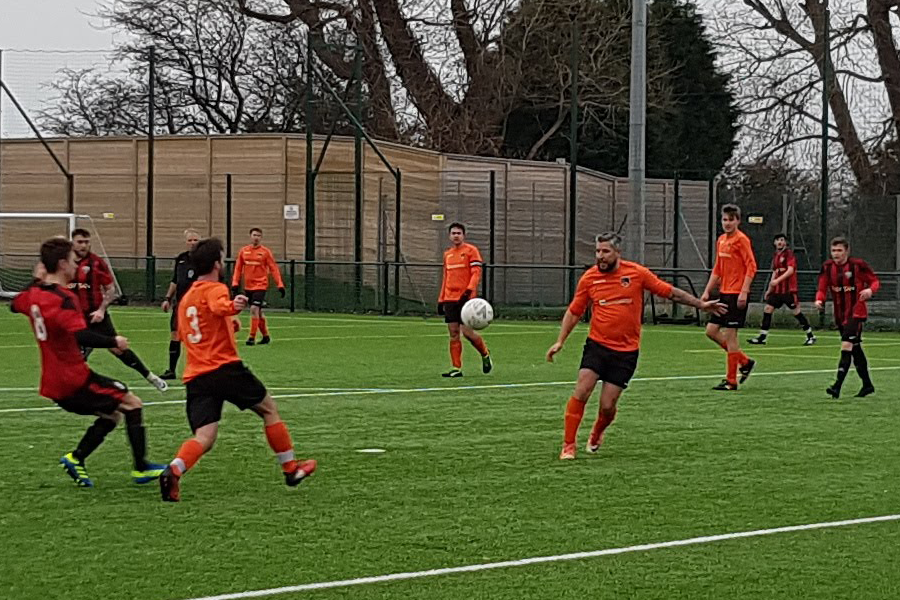 Coast Manager Neil Sutcliffe said after the match: “Deciding the team on Friday was a nightmare! Sam Cook and I deliberated for some time as everyone in the club is playing incredible football and the result showed it was the right squad for this game.

“The players who just missed out this time were there pitchside supporting their team mates and the entire mood in the camp is incredible! 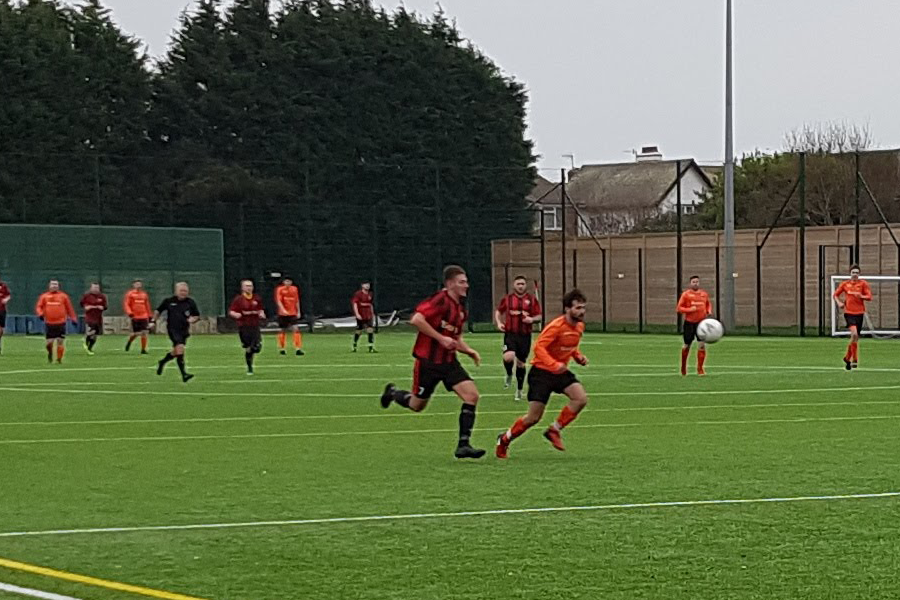 Man of the match went to Luke Darvill for his out right determination and work rate, scoring two goals and assisting a further pair.