Sandhurst were the Chopbacks opponents on Saturday, their form having been very strong in their last couple of games beating and drawing with two of the league’s top placed teams.

The lads of South Coast Athletico needed to be on top form, before the game the mood in the squad was high and very focussed. 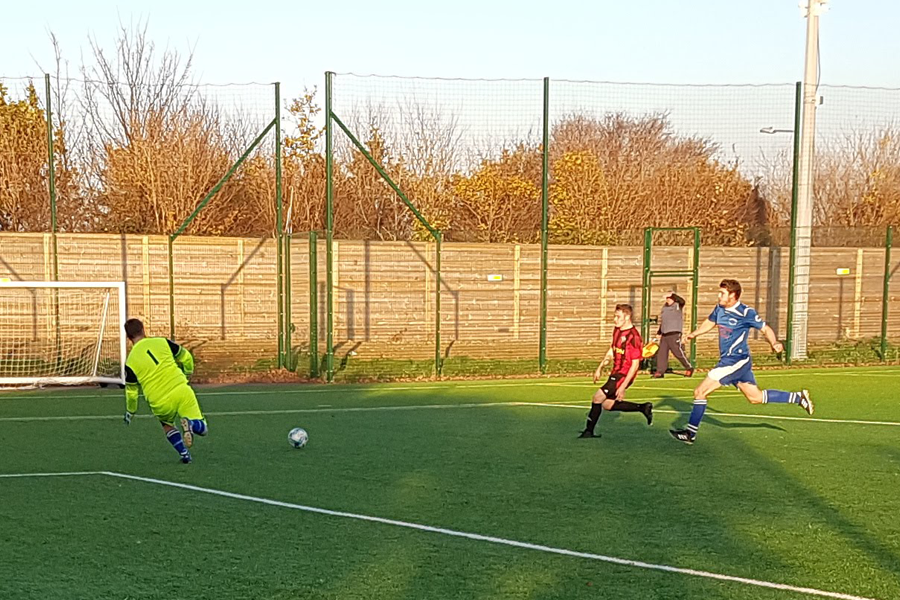 The game kicked off under perfect weather conditions, the visitors set to work pressuring the young Chopbacks for a sustained period demonstrating their threat with several breaches of Coast’s defence in the opening exchanges. 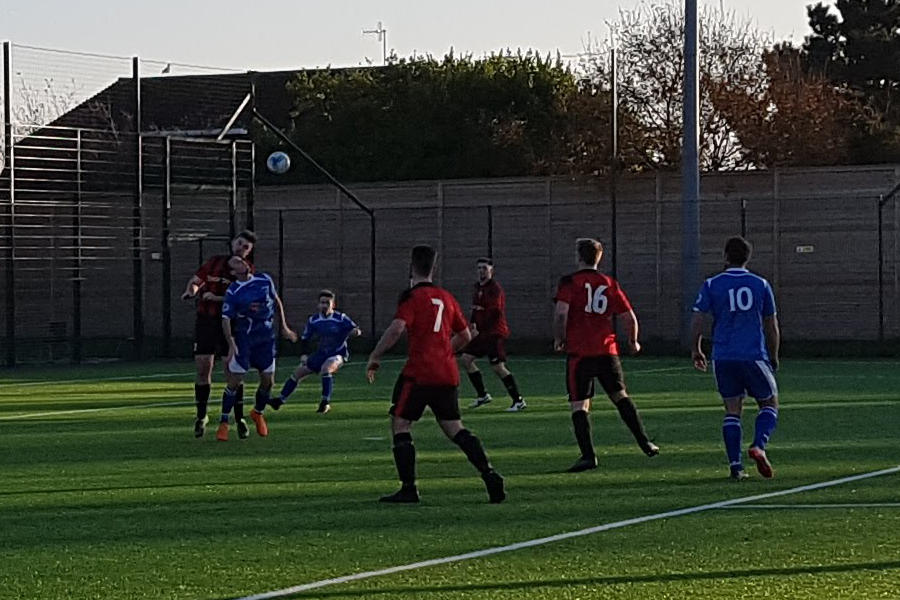 South Coast had been looking to improve their ability to defend set pieces and had several corners in the first 15 minutes to defend – and defend they did! 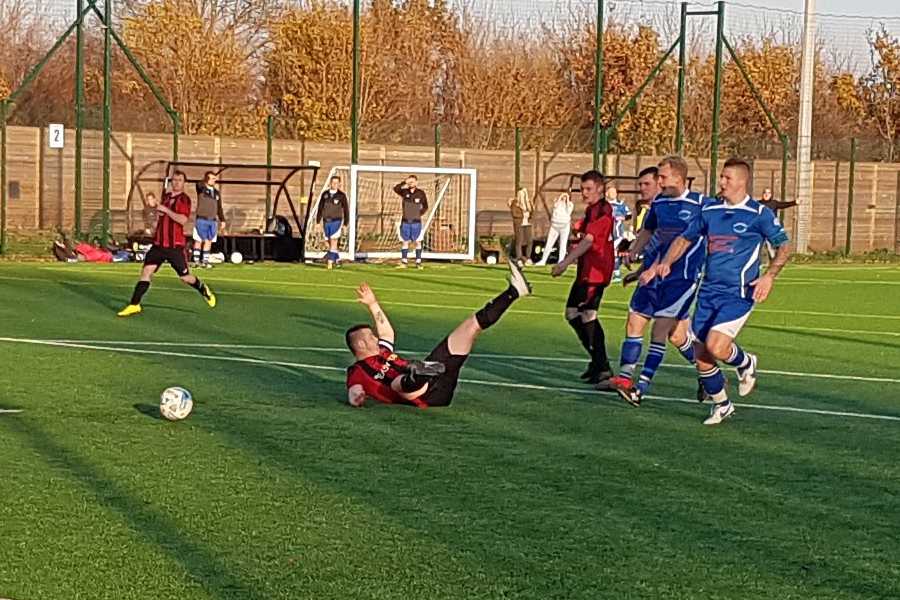 The lads looked like a different team with every man taking responsibility for their marker, being touch tight then attacking the incoming ball perfectly.

Sandhurst must have been frustrated as either a red and black shirt cleared or Chopback goalkeeper Ben Tate coolly and confidently dealt with every threat that came his way. 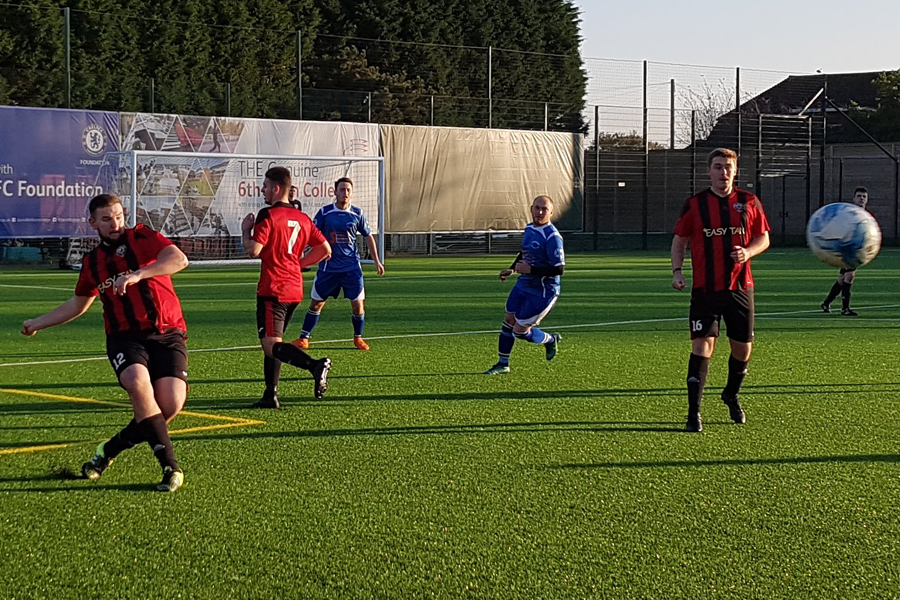 At the quarter of an hour mark, the Chopbacks pushed hard to gain a foothold in the match, attacking the visitor’s box with the ball ricocheting off their goal keeper and desperate defenders as three or four Chopbacks took it in turns to shoot!

The ball was eventually half cleared falling to a hungry Harry Jackson positioned just off the corner of the Sandhurst box. 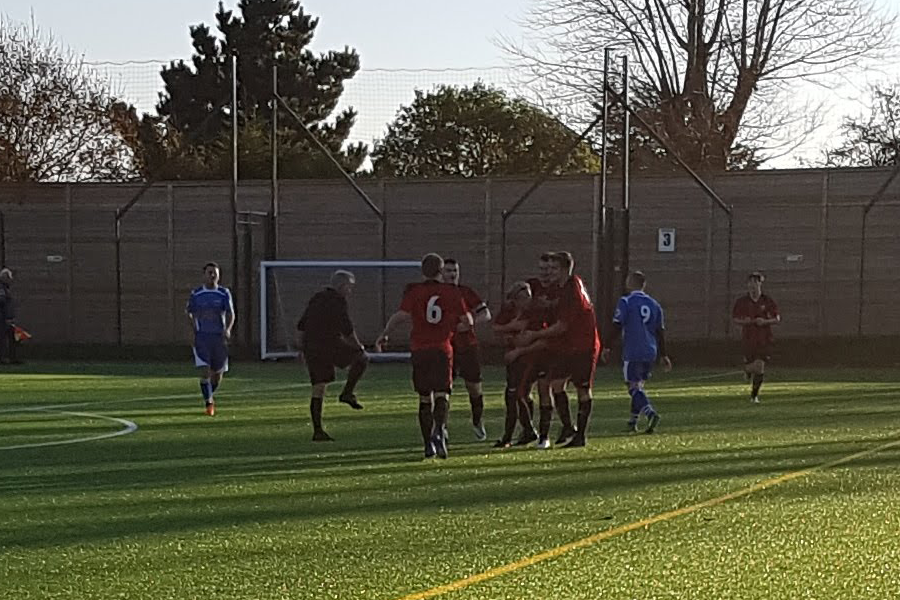 Harry had been scoring long range efforts routinely in training the past few weeks and didn’t hesitate to drill the ball hard to the left of Sandhurst’s goalkeeper who was beaten.

The visitors kept working hard and both teams had several half chances over the next quarter hour period, both teams playing well but cancelling each other out. 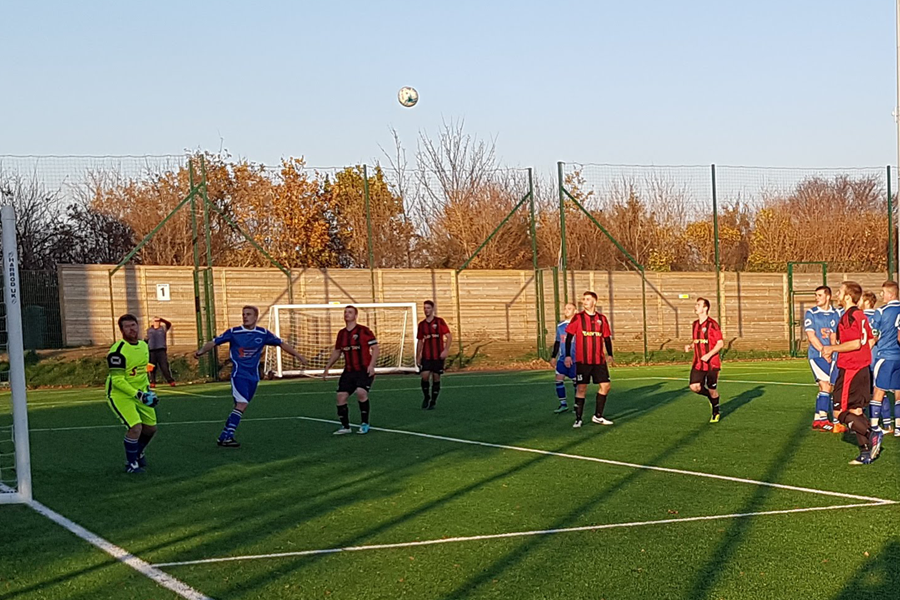 At 36 minutes in however that changed. South Coast won a corner, set up well with several players running into the six yard box loosing their markers attacking a Brad Owens delicious cross, Jack Bloomfield made excellent contact redirecting the ball into Sandhurst’s net to double the score. 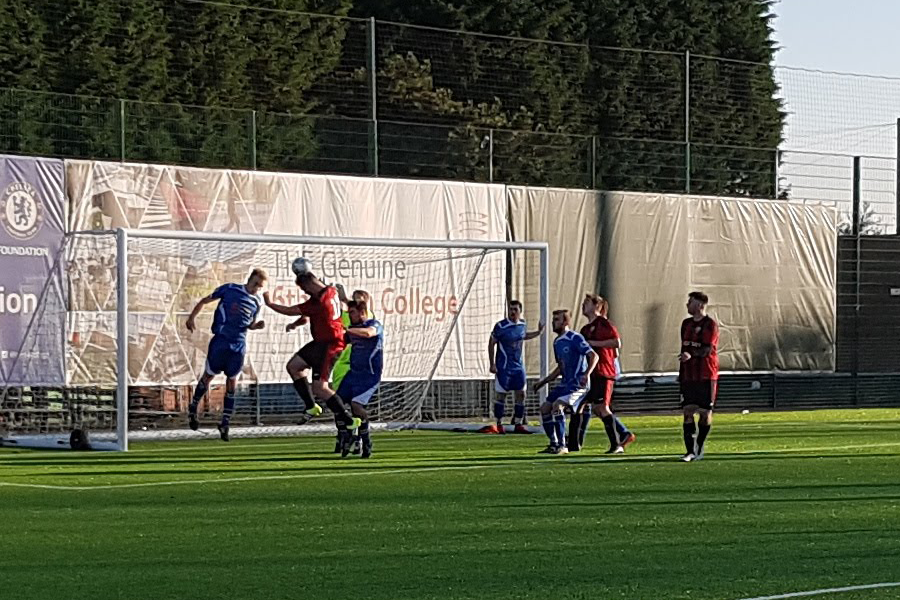 The Chopbacks football was flowing nicely, the ball being passed crisply,  switched from side to side, passed around the back from attack pulling Sandhurst out of position before the next Coast’s attack.

At 42 minutes in, the ball was played out from the back passed through the midfield and a through ball found the feet of Chopbacks goal machine Luke Darvill. 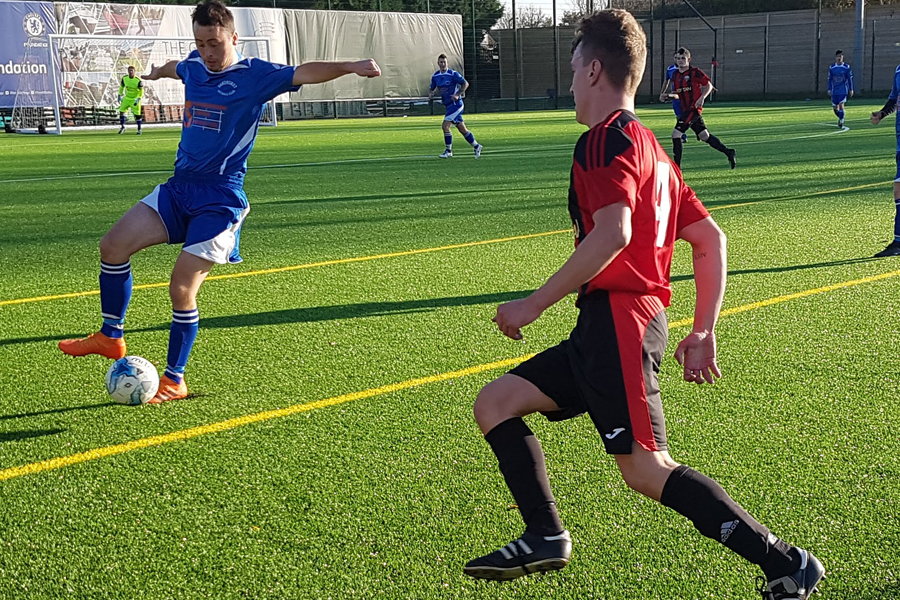 Darvill took on three Sandhurst players in a magnificent solo effort, seemingly dancing past each one in turn over 12 yards, the ball being exchanged between both of Darvill’s feet avoiding each challenge in turn.

The incredible piece of skill left Luke with only the goal keeper to beat, but on that form, no one would be saving the impending shot and the ball was buried with precision increasing the Chopbacks lead to 3-0. 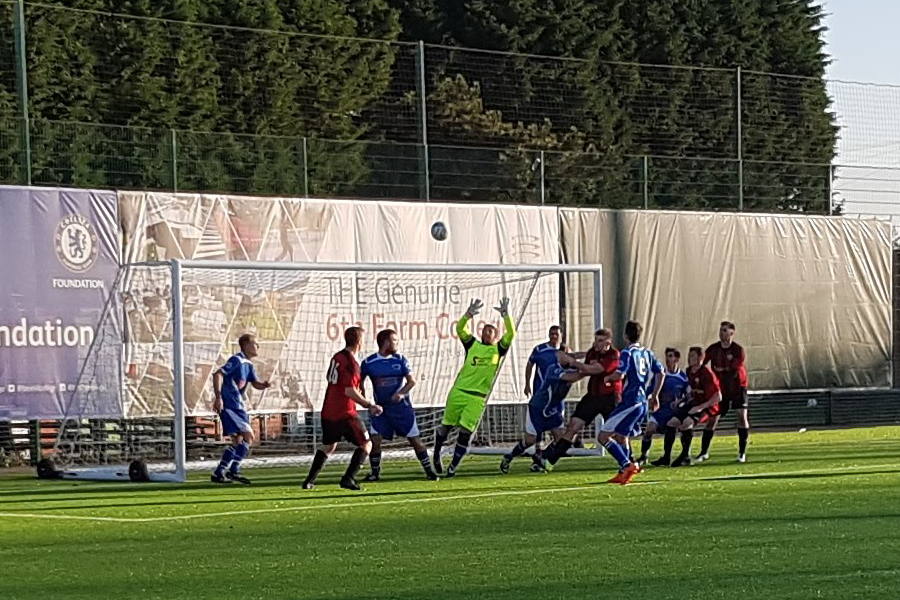 From the restart South Coast went straight back on the attack taking just three minutes for Jackson to play in the chopbacks other goal machine Connor Easton who controlled the ball and while turning his man played the ball to his right hand side opening up a yard’s space in the left hand side of Sandhurst’s 18 yard box.

There was seemingly no shot on, however Easton doesn’t respect the laws of physics and curled in the ball around everyone finding the left corner of the visitors goal taking the lads into the half time break 4-0 up. 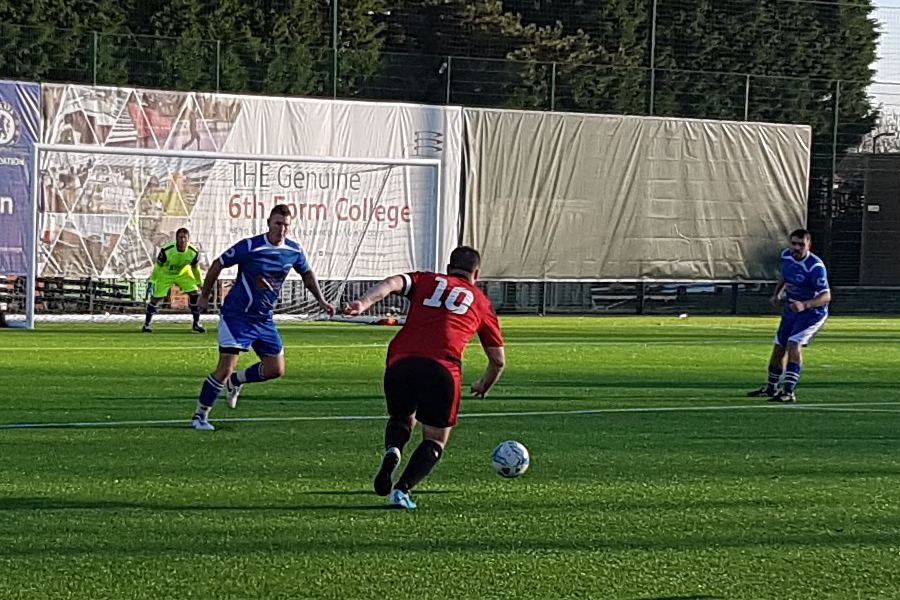 South Coast Athletico management team Neil Sutcliffe and Sam Cook emphasised the game was far from over and to expect a full blown attack from Sandhurst in the second half and as the game restarted that’s exactly what happened.

Chopbacks midfield of Owens,  Jackson and Byron Nichols had been outstanding, working as a tight unit, all three winning crucial tackles, tracking back to win balls and time after time breaking down the opposition’s attack.

There was controversy at the 64th minute as the Chopbacks defence held a tight line yet the ball played through by Sandhurst to an offside player who shot hard to beat the ‘keeper. 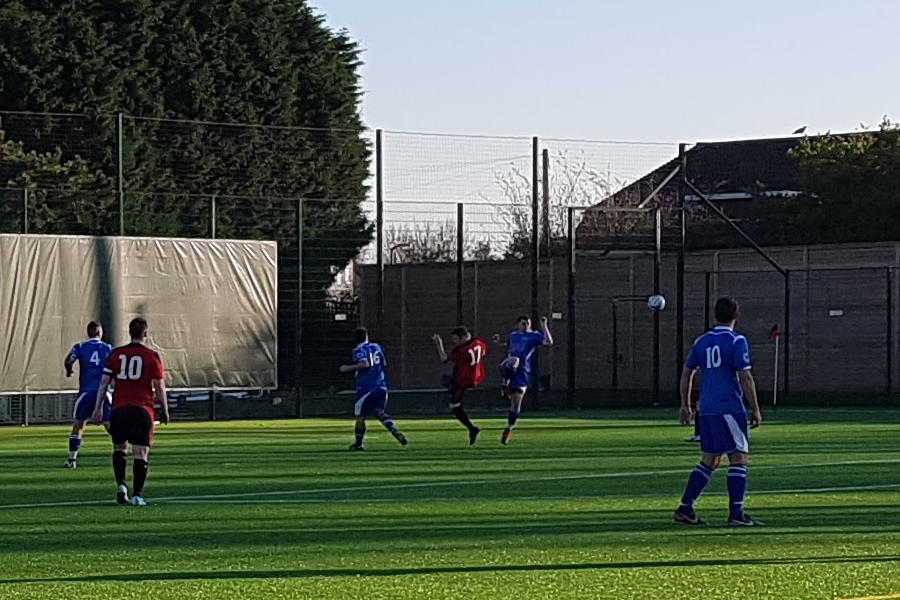 The linesman flag was up, however, the referee overruled it despite being more than 20  yards behind the play.

This gave Sandhurst a glimpse of hope and they switched up a gear sensing they could get more from the game. Four minutes later they broke through Coast’s midfield, crossing the ball into the box tapping in to gain a second consolation goal.

South Coast then pressed and had a couple of chances themselves holding on to win the tie 4-2. Overall it was an excellent display of football by the hosts who looked like they had their mojo back.

Man of the match could have gone to virtually every player, each playing out of their skins, but ultimately the accolade went to Ben Tate for a magnificent all round display of goalkeeping. 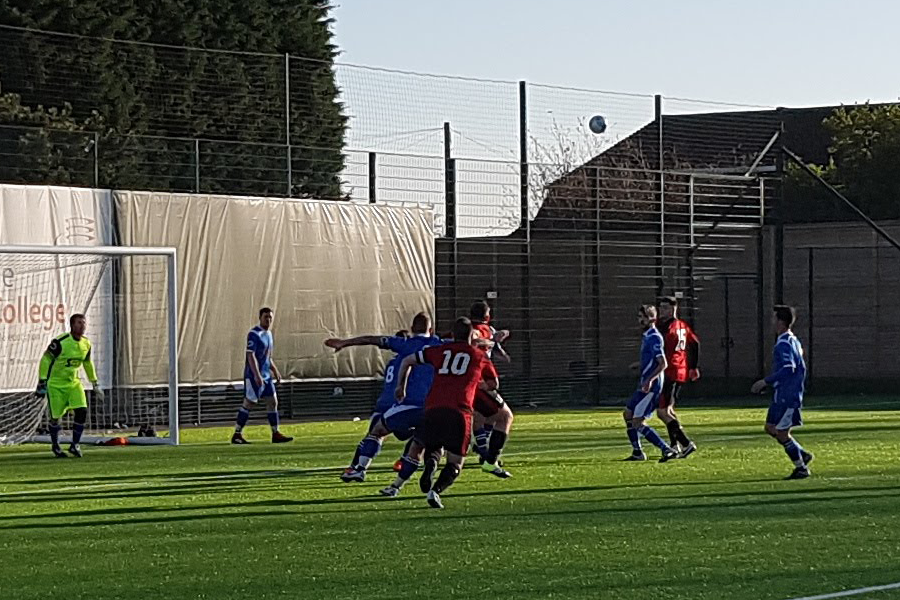 Next week the Chopbacks take on Hawkhurst 2nds in the Wisden Junior cup, after a draw in the league a few weeks back, this promises the potential of being a very good game.