After a recent dip in form South Coast Athletico travelled to Magham Down in an optimistic mood after a good week’s training for this weekend’s action.

Magham have found themselves on a difficult run of form since the season start due to a quantity of players leaving and new faces coming in, but the Chopbacks prepared for the game in their typical ‘prepare for anything’ fashion. 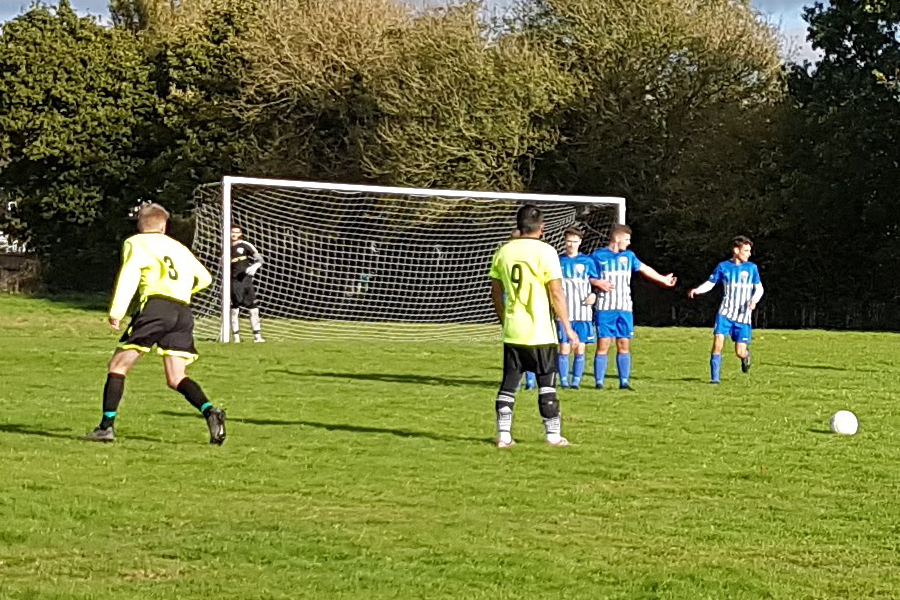 The game kicked off and Coast got stuck in, playing with a hint of swagger. It took Luke Darvill only eight minutes to open up the Chopbacks account after an assured through ball from Penney Ryan.

The hosts looked to respond and put the pressure on, coming inches close to scoring four minutes later, thanks to a recovering sprint and crucial goal line clearance from Jack (Joey) Bloomfield.

The dogged determination of the team was back and in full effect.

The whole team’s spirit seemed to lift and only seconds later Brad Owens picked out Connor Easton who slotted home to give the visitors some breathing room.

Magham Down tried to assert some authority to prevent the game getting away from them,  however Coast had found form and showed again what a devastating force this group of players can be when playing as a solid group with confidence and flair. 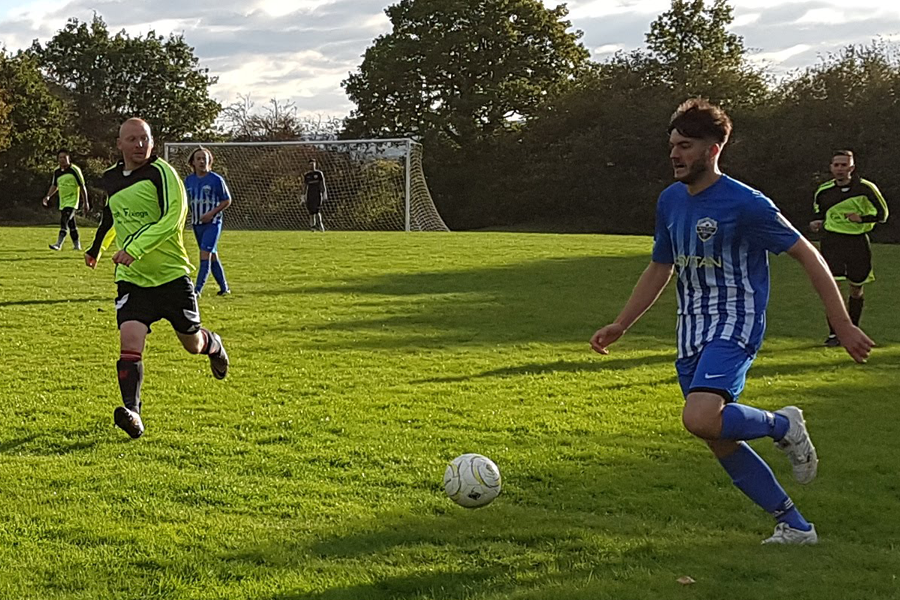 At the 20 minute mark Darvill crossed the ball in towards goal line hero Bloomfield, who despite not scoring so far this season struck the ball with a measure of accuracy and confidence that would suggest he’s bagged many.

Eleven minutes later Easton chipped the ball over the Magham keepers head and headed the ball in doubling his goal tally. 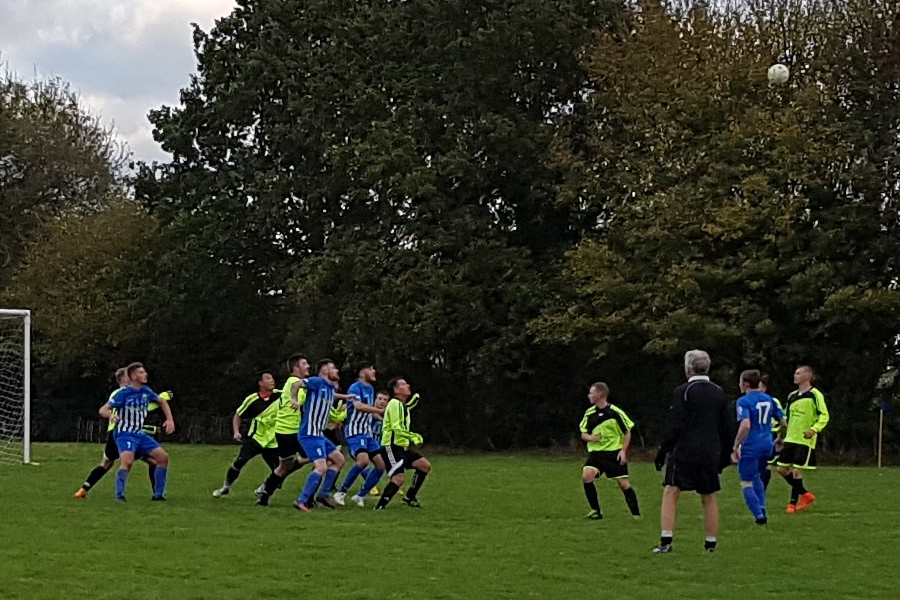 Six minutes later Darvill was bought down in the host’s penalty area and the referee had no hesitation in pointing to the spot. Luke selflessly gave the ball to Captain Easton to take the penalty as he was on a hatrick. 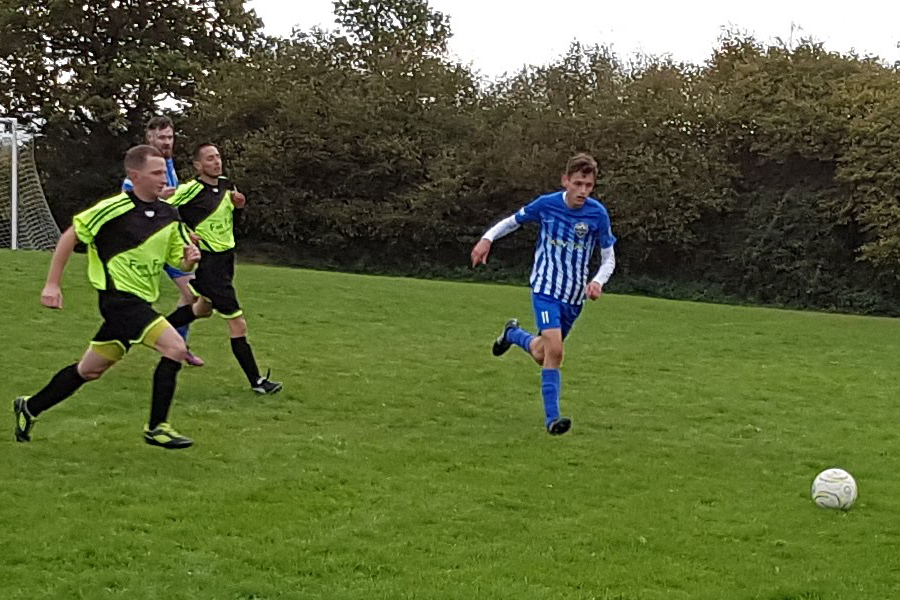 Despite not taking a penalty for many years Easton stepped up and slammed the ball wide of the keeper.

Brad Owens dug out the ball in midfield in one of his many had fought tackles of the day during the 38th minute, glanced up and smashed his way onto the score sheet from 22 yards making the score 6-0 to the Chopbacks. 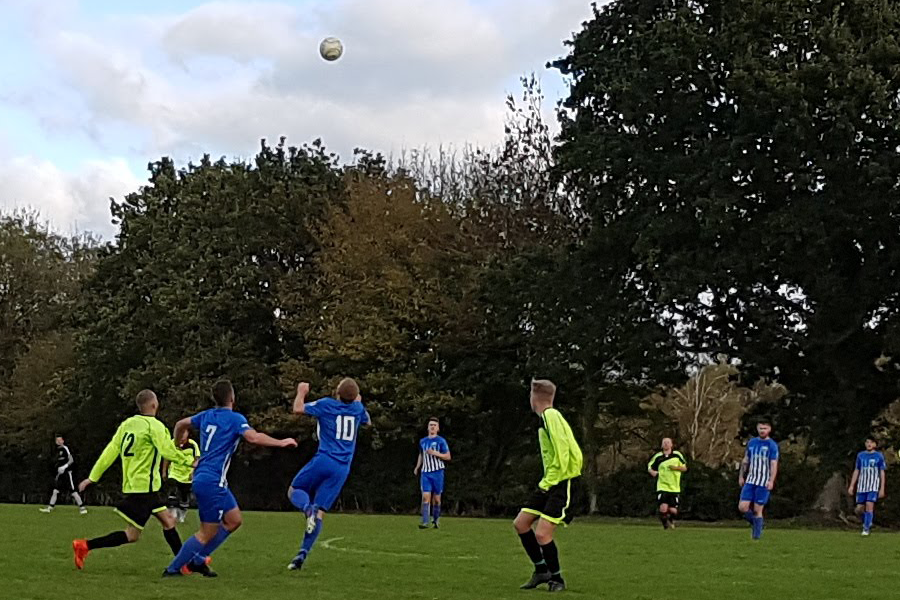 Magham Down pressed on with a dogged determination to get something from the game and kept Coast at bay for a while,  until the referee blew for half time.

South Coast’s manager Neil Sutcliffe’s half time team talk was focussed on concentration and keeping a clean sheet. The boys went back on pitch determined not to concede.

Magham were slow out of the blocks and after just three minutes Darvill played a well weighted through ball releasing Easton to go one-on-one with Magham Downs young goalkeeper, Easton showed his experience and class to slot the ball past and into the net for 7-0. 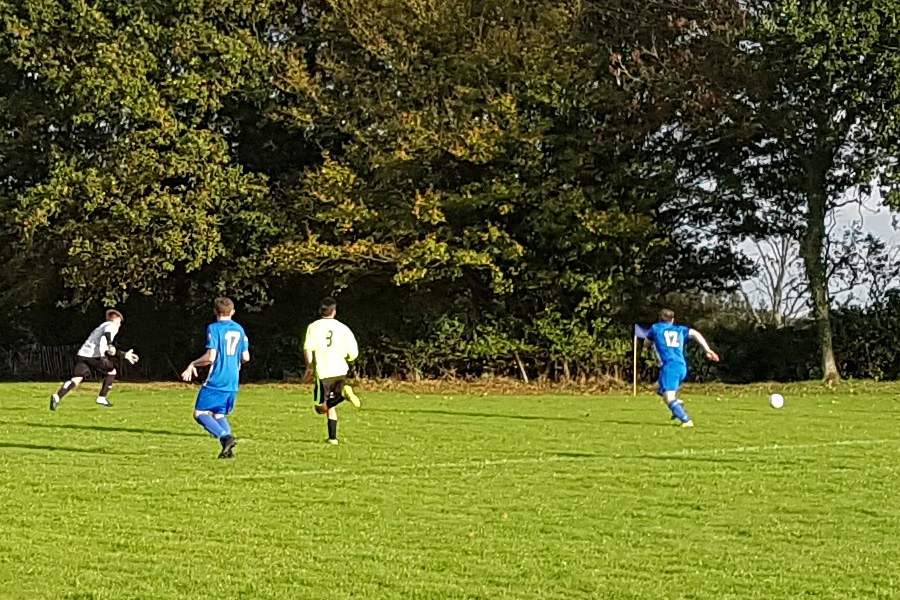 Coast’s midfield battled for the ball at the restart and Ryan took the ball into space,  saw Easton on the shoulder of his defender and played him in to score his fifth of the day.

As the 52nd minute ticked along Owens again won the ball in midfield powered into space and dispatched another stunning 25 yard effort leaving the keeper no chance. 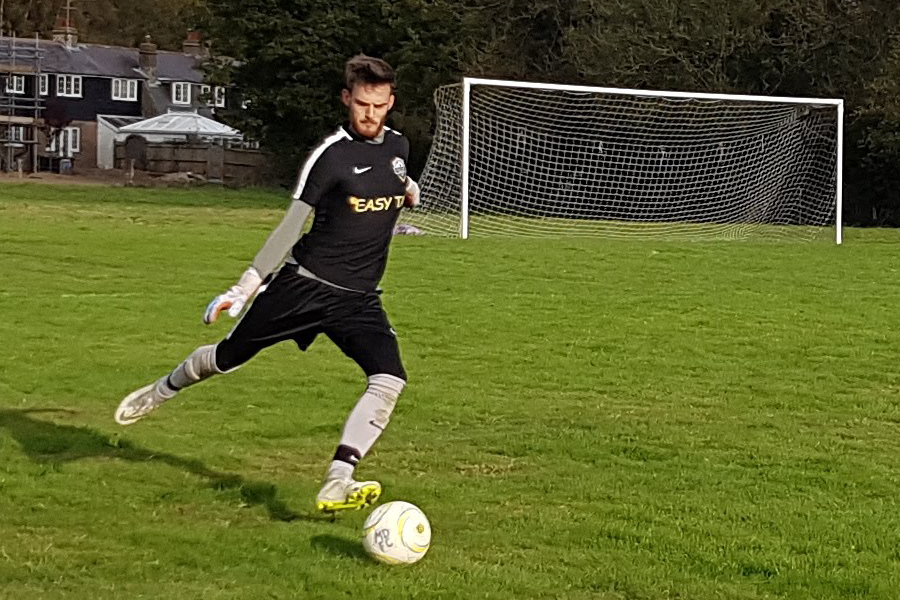 Four minutes further down the road and Bloomfield picked up a loose ball in Magham’s defensive third, attacked the space and rifled in a decent strike to grab his brace.

Magham again set to work trying to earn a consolation goal holding the visitors until the 66th minute when the ball found it’s way into Magham’s congested six yard box, the ball was hard to see but Easton latched onto it and found the back of the net, Charley Adams claiming a rare assist. 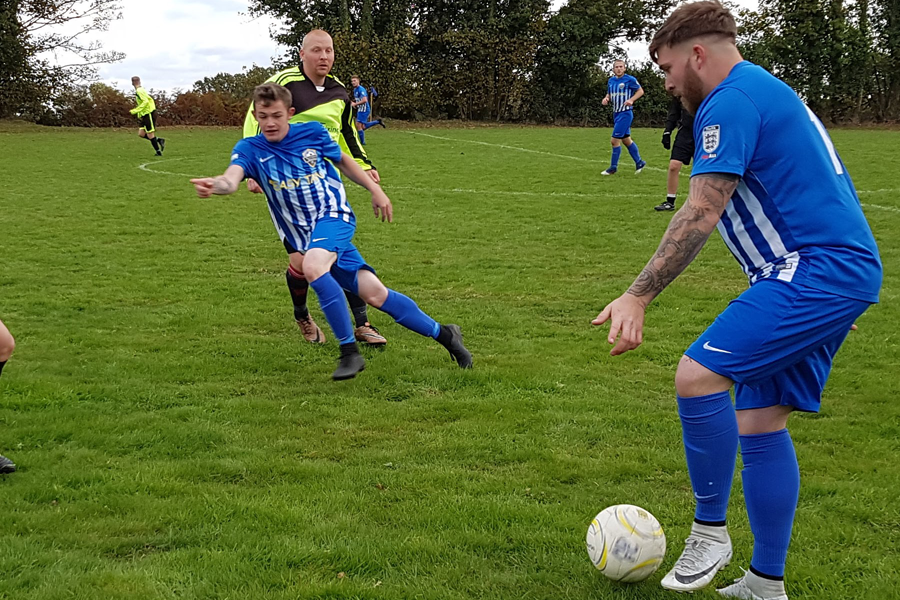 Just short of the 80th minute, substitute Mike Hawley smashed the ball at the host’s goal,  the ball rebounded and was claimed by Easton to become a seven goal hero!

Magham came close to a consolation as Chopback keeper Ben Tate who had for the most part was just a spectator, was called into action in a one-on-one which Magham’s attacking player put just above the bar. 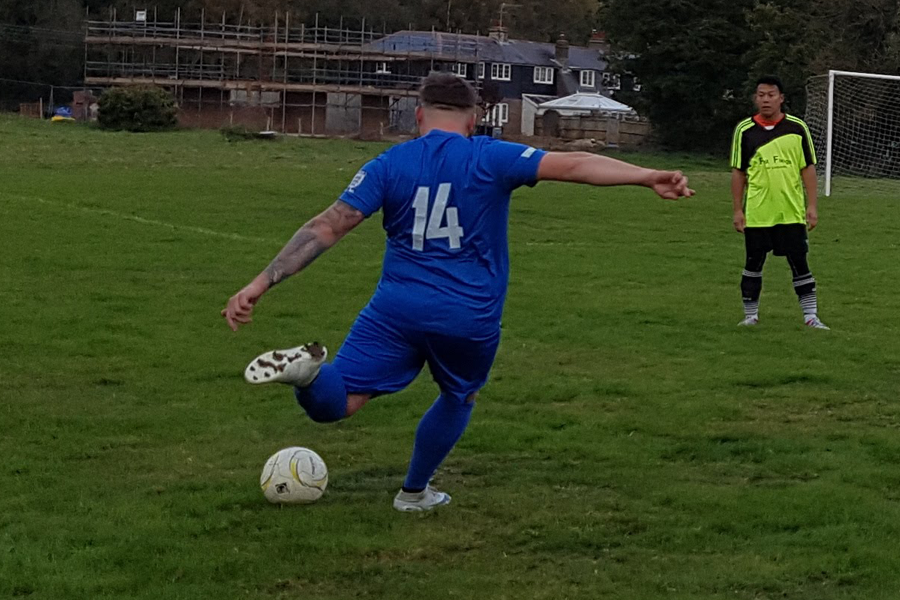 The game finished 12-0 bringing Coast’s goal difference in line with the teams above them.

After the match team manager Sutcliffe said: “The boys produced a huge team performance with every man not just doing his part but going the extra mile for each other time after time.  Magham Down were the perfect hosts, very humble and welcoming and we thank them for that. They have the basis of a good team who ultimately just need time playing together and they will grind out results in due course” 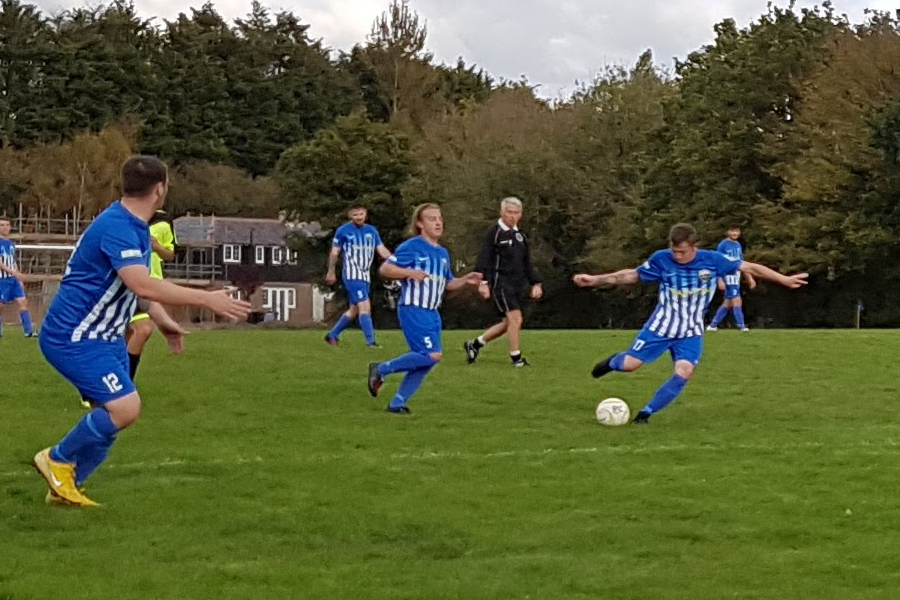 Man of the match was hard to choose but Baz Nichol and Connor Easton both put in a stellar performance to share the award.