Julia Hilton, secretary of the Hastings Green Party has been writing a regular column for Hastings In Focus since September.

Earlier in the year Julia was one of the candidates who stood for election to Hastings Borough Council under the Green Party banner, although the party failed to win any seats they made an impact on the town and to help in the campaign they brought Caroline Lucas, then one of the Green Party’s co-leaders, to town to help them campaign.

Whether the Green Party fields a candidate in Hastings at the next general election could be decisive with Amber Rudd’s majority standing at just 346 votes.

In the 2015 general election the Green Party attracted just short of 2,000 votes, in 2017 the party chose not to contest the Hastings seat and analyst believe most of the Green Party’s support would have transferred to Labour.

In 2018 the Hastings Green Party has ben making a lot of noise on key subjects – they campaigned hard against plans for a harbour and marina development, so we look forward to seeing the local party’s plans unfold in 2019.

Here we publish links to all of Julia’s columns published so far as well as the interview we conducted with Caroline Lucas back in April. 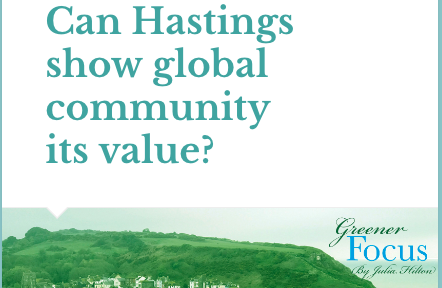 Action is needed while a window of opportunity still exists

It’s up to us to ‘do the right thing’

One thought on “Mapping out Hastings’ greener future”

Hastings Borough Council’s (HBC) planning committee will discuss the retrospective application for The Bunker at Rocklands tomorrow (Jan 19th) and officials are recommending approval. It is case HS/FA/20/00470 and you can see the full report going to members of the planning committee by clicking here The history of ‘The Bunker’ at Rocklands Caravan Park is […]

Employment as a traffic warden and supporting Tottenham Hotspur Football Club is something of a double whammy as far as social handicaps go.  Having said that, I was on my daily run along the seafront a few days ago when I found myself running alongside a delightful Spurs supporting traffic warden named Jim. Jim was […]